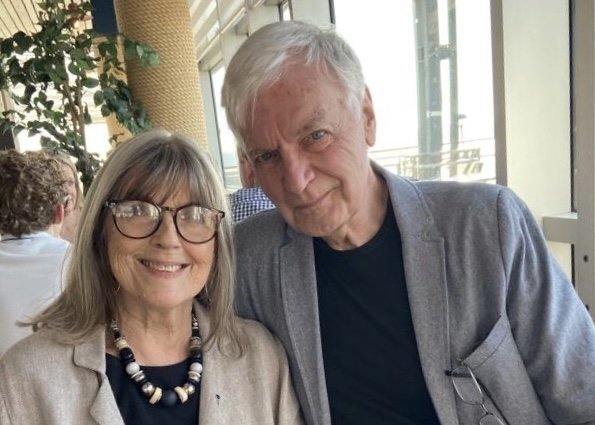 We’re very sad that Peter & Anna Bement are stepping down as Ffald y Brenin Trustees, although their partnership with us doesn’t end here! We asked for their reflections on more than two decades of service…

Anna writes: It all began at an ARM Wales Conference when my husband Peter and I were invited for coffee with Peter and Phyllida Mould. We had met them only a couple of times when we had taken church groups to Ffald y Brenin. By the end of the conversation, we learnt that Peter was very ill with only a few months to live and were asked to consider becoming trustees.

Inevitably, we didn’t get to know Peter well but over the years Phyllida became a dear friend, a wise mentor and an inspiring woman of prayer. I remember many lovely times in the farmhouse kitchen, enjoying a bowl of her delicious home-made soup, catching up with news of the Centre and hearing some remarkable stories of God’s work amongst the guests.

We have lots of memories of our own where God’s presence and favour have been wonderfully manifest, but two stand out in particular.

The first was when we took a group of teenagers from Llandeilo for a Youth Alpha weekend, culminating with a time in the chapel when Peter invited the Holy Spirit to bless the young people. I had stayed in the Common Room with a couple of the girls who were a bit undecided about going in. Suddenly, the door was flung open and in dashed a 15-year old young man, his face literally glowing. After a few moments, grinning from ear to ear, he announced, “I’m going back in!”. God did a wonderful work amongst those young people that weekend, several of whom are now engaged in Christian ministry. I would encourage anyone reading this to take their young people to Ffald y Brenin to experience the presence of God in ways they might never have imagined.

My second story is more personal. I had been suffering from bronchiectasis, a very debilitating lung disease, for over two years when I went to a summer conference at Ffald y Brenin. Two people, a guest and then a member of the team, prayed for me and I thought – maybe – I was healed. Any doubts that lingered were completely dispersed when I walked into the meeting to be greeted by these words sung by the worship group, “It’s Your breath in my lungs, so I pour out my praise, pour out my praise”. Healings at Ffald y Brenin are not uncommon but mine was special!

Peter and I have witnessed many changes over the past 23 years as the ministry of Ffald y Brenin has reached out far beyond the beautiful Gwaun Valley – changes in the trustees, the leadership and team, changes in the pattern of daily life (largely due to the pandemic), necessary changes in the buildings themselves. But it has been especially pleasing for us to see the Welsh language begin to be more prominent with the bilingual Rhythm of Daily Prayer now well established; recently three Welsh-speaking trustees have been welcomed onto the Board; there is a Welsh-speaker and powerful intercessor on the leadership team; work on a bilingual website is in progress. Diolch a fo i Dduw! (Thanks be to God!).

What has not changed though, is the sense of the favour of God on this place. We are convinced that the “breathing in, breathing out” practice of prayer since its foundation, has made Ffald y Brenin a place where God loves to dwell and continues to bless.