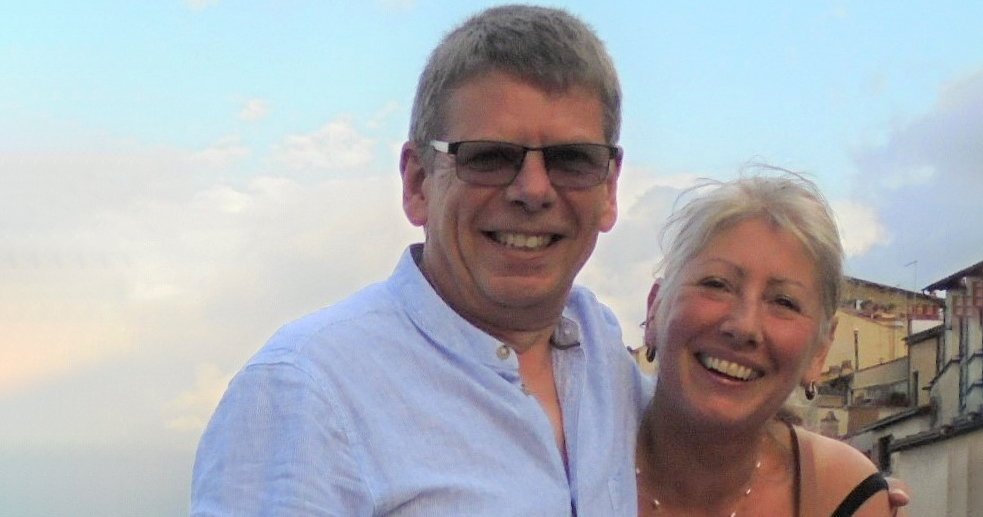 We’re thrilled to introduce you to the Goddards: Martyn & Annette are moving into the area so that Martyn can shortly take up the new role of general manager at Ffald y Brenin.

They’ve been based since 2019 on the Isle of Man, but have lived all over the world having worked for Youth With A Mission (YWAM) for a number of years.

The role of general manager is a new one for Ffald y Brenin. Martyn will look after the estate and manage the trust finance and policies, enabling the team to develop new resources and strengthen our existing ministry.

He brings a wealth of experience: as well as working in the car industry, Martyn has served in church leadership. He was also operations director for YWAM Medical Ships in New Zealand and site manager of a large YWAM base in the UK. Martyn’s wife Annette also served in YWAM for many years, leading and teaching in community development in Cambodia and other nations.

As we prepare for their arrival, we wanted to ask Martyn and Annette some questions to introduce them to the Ffald y Brenin community!

What are you most looking forward to about joining the team at Ffald y Brenin?

Ffald y Brenin came into my world while living in New Zealand when I read The Grace Outpouring and somehow a seed was planted. During a visit to the UK in 2016, I had a window of opportunity and decided to visit this place that I’d read about. Little did I ever realise I would be returning to serve with the team in 2021!

For me to have the opportunity of joining the team at this time is exciting as Ffald y Brenin continues to move forward in a new season. Personally, I am looking forward to a sense of ‘convergence’ as I can see the role of general manager bringing together several strands of my past experience, both in work and life. I am also looking forward to getting to know the team members, hearing their stories, developing new friendships, and together using our talents, skills, and gifts to serve the Lord through the ministry of Ffald y Brenin.

Can you share a God story that stands out to you from your years of ministry?

When God speaks it is easy to discard what seems improbable or irrational. When I was attending a YWAM training school, I was asked if I was interested in the role of manager for their vehicle workshop facility. To be honest, I wasn’t really interested at that time but, ten years later with a young family, I returned for a reunion at the YWAM base. I found myself drawn to a large building, a garage that had been recently built.

I remembered the words spoken ten years earlier and had an inner prompting to take on running the garage for the mission. It transpired the facility was no longer operational and not fulfilling the original purpose of maintaining the mission’s vehicles, staff vehicles, and offering basic technical support.

Within 6 months we had relocated to this YWAM base. I remember entering this wonderful building, looking at the workshop equipment and old vehicles, with no technicians or other staff, wondering how on earth I was going to resurrect this facility and vision. Each morning I entered the garage and prayed, asking the Lord for staff, praying specifically for trained technicians, particularly for someone with experience who had completed an approved apprenticeship.

I spent my first months in faith, spring-cleaning, repainting, getting rid of old equipment and cars beyond repair, servicing workshop ramps etc. During this time a ‘vehicle management plan’ began to emerge that could serve the UK YWAM bases and staff – providing vehicle maintenance and replacement and offering basic mechanical training for those going overseas.

A 6-month trial period was agreed, if I had the staff, to see if it was viable financially and fulfilling the objective. Soon I was approached by a qualified young man who was attending a YWAM training school. He had been avoiding the garage as he wanted a break from cars, yet he felt drawn to the facility. I shared the vision and, after completing his school, he joined the garage team.

Within months, I also heard about a man who was a trained vehicle technician with a wealth of experience who had served overseas in missions with his family. This was exactly what I had prayed for, and he joined the team.

The rest is an unfolding story of YWAM’s Vehicle Management Centre (VMC), servicing vehicles and replacing cars and minibuses for YWAM bases and staff around the country. Training seminars in ‘Preventative Maintenance’ enabled staff to learn how to diagnose problems and avoid expensive repairs, and also equipped those going overseas to serve in missions.

One day I had a visit from the leader who around 13 years earlier had asked if I was interested in managing the original garage. He said, “I always knew you were the right person – it was all about the timing.”

When I was doing a course in Primary Health Care, I asked the Lord where He wanted me to work and put it into practice as I didn’t have a particular country or people group on my heart.

While on outreach in Honduras, I was told about a ministry in Cambodia that was looking to branch out into community development through a programme called CHE (Community Health Evangelism) and was encouraged to consider this as it was felt that it would be a good ‘fit’. Having also done a course in Community Development, this resonated with me in terms of the vision and aims of the programme and was also an ‘ah-ha’ moment as I had previously worked with Cambodian refugees in Thailand!

So, I asked the Lord for confirmation and from then on just kept stumbling on things related to Cambodia (an article in National Geographic, newspaper items…), but it was on return from outreach that He spoke most clearly.

We arrived back on campus, dropped our bags in our rooms, and went to the auditorium for a time of worship. A lady was standing on the platform and, as we entered the back of the room, said “if you feel that God is calling you to Cambodia, now is the time to come!”

Because of this, from the time my plane landed in Cambodia just over a year later, I had a clear sense of ‘coming home’ and a certainty that I was where God wanted me to be. This carried me through the challenges that naturally followed in the 8 years that I was there (I originally made a 3-year commitment, so another element is to not be too fixed on our own ideas and plans!)

Is there a passage of scripture that has shaped your life?

Proverbs 16:9 “We can make our plans, but the Lord determines our steps.”

I’ve always firmly believed that if our hearts are for the Lord, he will direct our steps even if the pathway seems illogical at times and even if we make mistakes – He will guide and unfold His plans and purposes. This has proved true in my life and has taken me to various locations around the world where I have met and worked with some incredible people.

Isaiah 58:6-12. This scripture played a large part in my response to God’s call into missions in the late ’90s, specifically leading me to community development.

It challenges us to pursue compassion and justice on behalf of the poor, but my journey in community development training and ministry has been about learning how we respond, what that actually looks like, and how to respond in ways that really help and do not harm ‘the poor.’

What has God been teaching you or showing you during lockdown?

That’s an interesting question as I think that our experience of the pandemic/lockdown has been so different on the Isle of Man than in the UK!

Like most people, I think that God has taught me that life is fragile, that we cannot depend on anything in life but Him, and that ultimately, our only security is in Christ.

Most of our challenge in this time, however, has been around the need to keep trusting God when things have not worked out well or as we had hoped for. We have learned to keep trusting that He is in control, keep seeking His provision, and keep asking Him to show us a way forward when it seemed dark and we could not see where we were heading.

We like to go for country walks and enjoy sight-seeing in general, especially historic places; we enjoy meals out and going to the cinema or theatre; we play Rummikub quite frequently! Having lived by the sea for the last two years, we have also recently done some kayaking and paddle boarding and enjoy being on the water.

Thanks for sharing your lives with us, Martyn and Annette! We look forward to having you join the team at Ffald y Brenin!